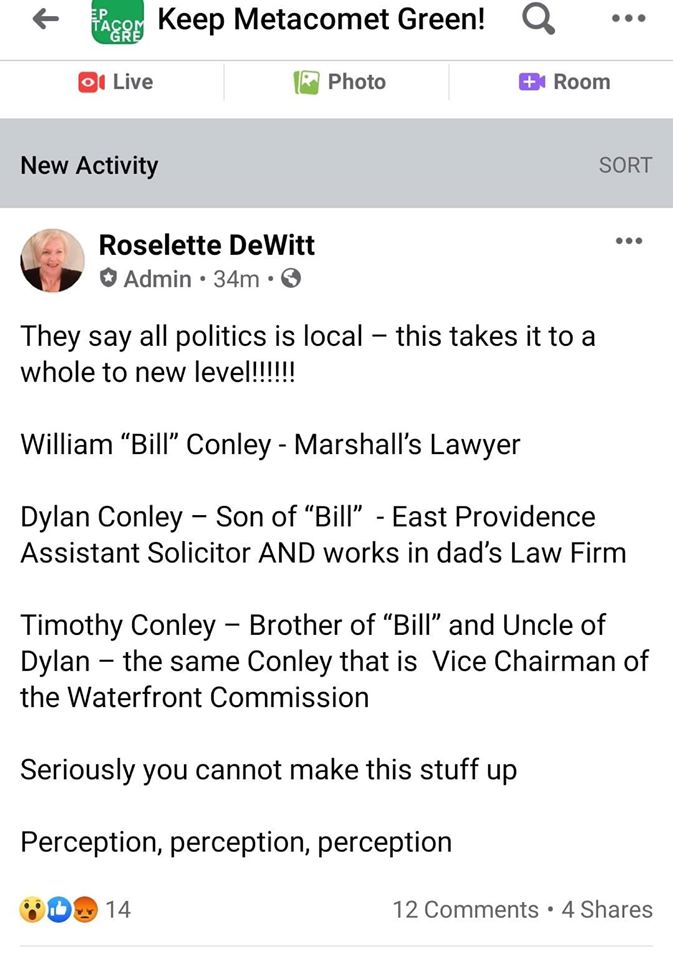 ​Henry McCormick 7-13-20
Questions to get answers to:
Who received contributions from whom?
What tax incentive have been or will be promised?
Will there be low income housing?
​_____________________
​Two lists here, some repeat observations but worth it.

​​​Post by Joseph Cabral of Questions for Councilmembers:
Ok a few thoughts about this development, I am going to give you my opinion of some very elementary issues when building a new development.
1. Has a traffic analysis been completed to see if the current configuration can handle the increased capacity from the off ramp at 195 to the proposed development?
2. Has a environmental impact analysis been completed as the development will be next to wet lands?
3. Will the current infrastructure, water, sewer, electricity have to be upgraded to handle the capacity demand. Who will pay for this?
4. Are there going to be tax credits given to the development or tax breaks given to the development, If so why?
5. Will environmental soil and ground testing be completed, most golf courses use pesticides and other chemicals to keep the grass nice and green.
This can impact the natural habitat surrounding the edge of the golf course from run off during excavation.
6. Has a analysis been completed to show the impact of the community now that it’s being put in an area that is mostly residential encompassing the edges of the property.
7. If the zoning needs to be changed, I would start a door to door petition of surrounding homes to sign to stop this if that is what the local community wants.
8. Where is the Economic Analysis of market conditions for a strip mall / shopping center is there a market?
The reason I’m asking about number 8, this is East Providence and there is plenty of commercial spaces that are empty already. Is there a demand for more empty space and if so who will they be bringing in?
9. Are we ( EP) going to help finance this? We shouldn’t, That property is prime real estate and can be developed to provide much needed new housing in the state with supporting elements like parks, local stores and other growth planning a community needs.
10. If there is a impact to residential real estate ( market value loss or stagnation) in the area, because the neighborhood went from a golf course to a commercial strip mall. Who will subsidize the local neighbors loss if they decide they don’t want this.
11.  Why are we allowing for a variance change for this development without the city doing their diligence? This could end up costing tax payers.
12.  The golf course has been around for over a hundred years, this means one hundred years of herbicides, pesticides, and other chemicals in the ground. Erosion control won’t stop it from going into any body of water surrounding the golf course. Oils have an effect on local wildlife above and below ground.

Metacomet Golf Course, Veterans Park Way
Privately owned, sold to a group of men in 2019 with intention to maintain golf course but now seeking to sell for high profit to developer Marshall Properties.

Marshall has entered into a purchase and sale agreement contingent on rezoning of the property (currently open space?) to commercial mixed-use and submitted a proposal to the zoning board for heavy development consisting of residential, retail, office space and some open space (wetlands).  Request was approved by zoning board. (phase one)

Property abuts neighborhoods on Veterans Memorial Parkway, Fort St., Fisher Street, S. Broadway and Lyon Avenue.  Residential  homes are present on Fort Street, Fisher Street, and S. Broadway, some of which may be as close as 30 feet from the property.

Athletic fields, playground and an elementary school are off of Lyon Avenue.

Veteran’s Parkway was built as a scenic roadway by the State of RI and later given to City to maintain.

Only access to 195 West from Riverside is via the Parkway.

Land may have ties to Narragansett and Wampanoag Indians, rumors of burial grounds

Several wildlife species are on property including coyotes, swans, foxes, geese, turkeys and several varieties of birds.  There is speculation that there may be endangered salamanders or turtles also on property.

Some of the property is wetlands (non-buildable).

Property may have water main to East Providence cutting through it (via Providence River)
Not clear if any environmental impact or studies have been conducted, and if they have, results have not been shared with residents.

Can sewer and water lines support this type of development?
​
What will be the effect on the police and fire departments?

Marshall Properties has contacted *some* neighbors and invited them to a neighborhood meeting via Zoom on Wednesday, 7/15/20.  It is not clear which neighbors were invited to the meeting (via a letter in the mail). City ordinances (?) require only neighbors within 200 feet of the property line need to be contacted, rumored that not all did receive letter.  The letter has been widely shared and many are planning to attend.

The City Council is hosting Public Hearings on the rezoning on:  Aug. 6th, 6-9 pm and Aug. 11th, 6-9 pm.
City Council will vote on the zoning after public hearings take place.  Vote has not been scheduled but expected to be in September (per Anna Sousa, councilwoman, ward 2).